1. The inner wall of drum can be lined with several pieces of rubber or polypropylene board, and there are air holes on the corresponding position of the cylinder. When the lining moves from the bottom to the top with the cylinder at the same time, the lining sags due to the self weight, so that the materials attached to the lining fall down due to gravity, which plays the role of automatic cleaning and caking.
2. When necessary, ammonia can be injected into the material layer of the drum granulator to make the material react.
3. In the granulation process of organic fertilizer production line, steam can be sent to the material layer in the drum to increase the temperature of granulation material, improve the salt solubility of granulation material, and achieve high liquid volume under low moisture content to meet the liquid phase quantity required for granulation, and reduce the evaporation water amount in the drying process.
4. During the operation of drum granulating machine, the operator can observe the granulation of materials at any time, so as to take timely measures as required to ensure the normal operation of the fertilizer production line. 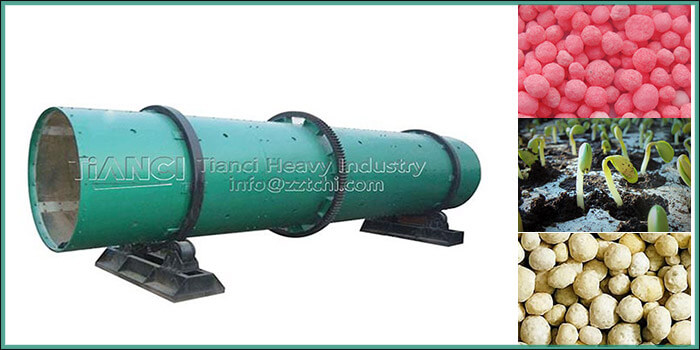 However, we can control the amount of return material in the whole fertilizer production line to make it reach a reasonable range. There are many large particles returned, which directly affects the smoothness and roundness of the product. According to experience, the amount of returned material is about 30%, which can effectively control the formation of large particles.

Pre:Selection of machine for granule and powder organic fertilizer

Next:How to install and debug the disc fertilizer granulator machine